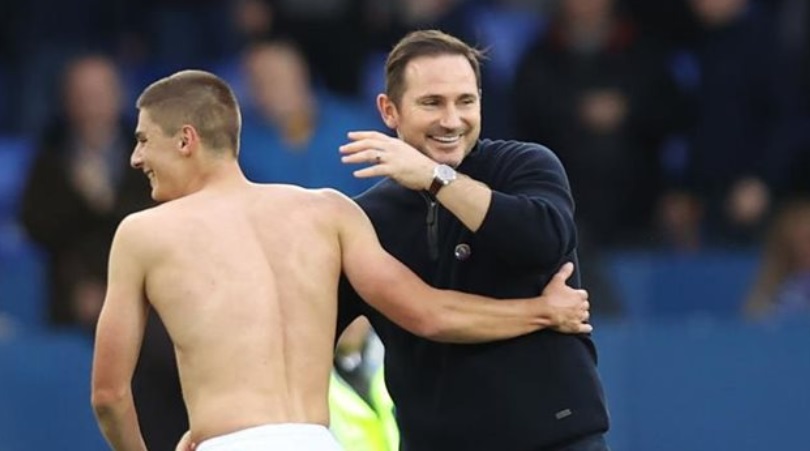 Vitalii Mykolenko followed his best attacking performance of the season by putting his body on the line to help Everton secure a draw at Fulham, writes the LiverpoolEcho.

The 23-year-old earned the praise of both Frank Lampard and James Tarkowski after the trip to Craven Cottage, the pair namechecking the Ukraine international as they heralded a resilient display from the Blues. Lampard was clear in the aftermath of the goalless draw that there is room for improvement but, while Everton faded as an attacking force in the second half, Jordan Pickford later highlighted how this was a match the club would likely have lost last season.

The new-found solidity has been inspired by the arrival of Tarkowski and centre back partner Conor Coady but Lampard now has a spine he can depend on. And Mykolenko’s performance showed the value of contributions from across the team.

Mykolenko made five clearances across his 90 minutes on Saturday evening, blocking three crosses and showing willingness to get in the way as Fulham mustered 24 shots on goal. Despite the number of attempts, few seriously troubled Jordan Pickford – Everton’s number one producing excelling stops to the ones that did, from Willian and Aleksandar Mitrovic. That was largely down to the efforts of the back four and, after the match, Tarkowski pointed to the role of his left back as he said: “I thought he was top class today. Positional wise, he blocked four or five shots on target, and he was getting two-v-one on the outside and still blocking it. I thought he was superb.”

It was a different type of display to the previous game against Crystal Palace, in which Mykolenko offered a serious attacking threat as he overlapped Demarai Gray during his most adventurous performance of this season – effectively setting up Anthony Gordon’s goal in the 3-0 win when his shot was pushed into his teammate’s path. Lampard was hopeful Mykolenko could replicate that at Craven Cottage but acknowledged it was difficult as Fulham pushed Everton back. There was one glimpse of his forward ability in the second half, when he spun Bobby Decordova-Reid on the halfway line and burst down the touchline only to be pulled back by the recovering forward, who was handed a yellow card as a result.

But he praised Mykolenko’s fighting performance as he heralded his progress this season, particularly impressive given the impact of the Russian invasion of his homeland. And Lampard believes Mykolenko has the potential to get better, he made clear after the Fulham match.

He said: “I’m really happy with Myko, he was great going forward – he was an extra threat last week. Today we wanted more of that but it wasn’t so possible, maybe in the first half he made a few crosses and got around Dimi a bit but defensively he was strong, sound, resilient, blocking things, good positioning at the back post which you have to have against the threats they have got up front, so I am pleased with him. He’s a quiet lad, he’s obviously got a lot going on in his life and I think what he has done in terms of how he has handled himself moving over here and becoming a real fixture in our team is a real credit to himself and I believe there is a lot more progress [to be made] as well because he is young and there is a lot he can add to his game.”